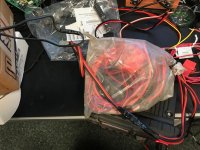 Oh I posted too soon. this was the speaker wiring off the accessory connector. Took off the tape gobs. NIIIIIICE! Extra 2' of speaker wiring went to nowhere and was just cut off.
Speaker could have shorted to ground at any time! 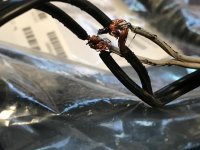 It appears that these guys don't have basic install tools or supplies. A roll of electrical tape and a screwgun? That's it? I'll donate a bag of butt connectors and a crimp too.

Improper tools does not justify that mess. Most of us would acknowledge an attempt to do the job professionally even without the correct tools. The 2' of extra wire is the sloppiness we are seeing over and over. IF the excess wires had been trimmed back and the connections properly/neatly done I might have given the installer the benefit of the doubt but this stuff is totally unacceptable.
OP

Is not happening anymore. It is going to take 10 years to clean this stuff up!

Bill_G said:
In the late 70's when low band was still in heavy commercial use, I experimented with deviation on a school bus system. Back then, as now, everybody complained about coverage, but they either didn't have the money, or didn't want to spend the money, to improve their coverage. I was just supposed to wave my hands, tighten a few screws, do some very precise alignments, and magically coverage would suddenly explode to magnificent distances with perfect clarity. Except it never did.

We were allowed +/-5kc, but I noticed these Mocom 10 mobiles accepted almost double that without distortion from my service monitor. Motracs and Mocom 70s would only go to about 8kc, and since those were in this system as well, that set the high water mark for deviation. On their next PM, I proceeded to bump up the deviation on every radio to about six and a half knowing that dull mic elements, and user mic techniques, would ultimately keep most radios well within the legal limits.

I settled on 6.5kc as my limit knowing that (A) we were out in the country with no adjacent channel users, (B) back then most systems used auto-puke, not PL, so they were essentially CSQ with no cochannel users, and (C) they were all low to the ground systems surrounded by the forests of the Michigan UP and the Great Lakes. If I'm not hearing anybody else out there, nobody is hearing them. Let these people get that extra couple miles out of their radios.

When I moved south to Detroit where systems were moving to UHF repeaters in dense RF environments with multiple cochannel and adjacent channel users, I had to tame my game, and come up with another plan. That's when I started making my own RC time constant compressor circuits to flatten out the dynamic range and get it to its legal max. Motorola was going in the same direction with their IDC circuits in the Micor and the Maxar which were just coming out. OTOH, GE was staying au natural, and many many Mastr, Mastr II, Mastr II Pro mobiles became hosts to my mods. Fun times.
Click to expand...

Undoubtedly the statute of limitations have run out!

Major Edwin Howard Armstrong would applaud your efforts in making FM work the way he intended it to be!

You can never have enough FM with FM.

Actually I did something similar to my narrow band ICOM IC-4008A FRS radios. I found there was a sweet spot in the OAB bandwidth and exploited it by bumping them up closer to 4 KHz so they would work spiffy with my Saber GMRS radios.

Notarola said:
RFI: They appear to be trying to fix a symptom rather than the root cause. I believe they have convinced themselves that this is a major technical issue and not something simple. Any differing opinions are not met with enthusiasm as I found out.

The possibility of the multipath argument fails as the unit is mobile thus the mobile to site path would be constantly changing. Add to this other units occasionally in the same area dont have the issue. On a technical note looking at the RF spectrum and the incoming signal would show the level drop or even the cyclic phase cancellation if that was the issue. For it to affect just the detected audio would require a set of circumstances that become mathematically impossible as you pointed out.

There is nothing locally that could be a cause of RFI. I did do a drive by with my test hardware and the input to the repeater range is clean with the nearest in use freq being 945Khz and about 7 miles (a farm) away.
Click to expand...

There is another possibility. Someone does not like the guy who is having the audio problem and they are "mashing the button" when he talks.

Wodie said:
Hams around Mexico City got a new fashion: add mic a preamplifier to VHF and UHF radios, so they can boost their volume and so improve their coverage. Now distortion is everywhere.
Click to expand...

They are trying to get that fancy P25 Vocoder performance.

RFI-EMI-GUY said:
Undoubtedly the statute of limitations have run out!

Major Edwin Howard Armstrong would applaud your efforts in making FM work the way he intended it to be!

You can never have enough FM with FM.

Actually I did something similar to my narrow band ICOM IC-4008A FRS radios. I found there was a sweet spot in the OAB bandwidth and exploited it by bumping them up closer to 4 KHz so they would work spiffy with my Saber GMRS radios.
Click to expand...

I learned a lot about FM performance from those experiments. Over-deviation was also the quick way to earball align the IF chain in the field. It was banging the BW limits causing distortion in the recovered audio that in turn affected the squelch sensitivity. During the more recent narrowbanding effort, I was quick to learn how to maximize the dev in many models of radios. Most guys just clicked the box, wrote to the radio, and walked away. I aligned every radio concentrating on their base stations and repeaters first. My customers did not experience the widely predicted coverage loss. But, I wasn't charging just $8 a radio like our competition. I got to play janitor on lots of systems since those days. Just like the school bus, the amazing miraculous difference of good deviation continues to draw customer appreciation. It's kinda like being a highly regarded restaurant because I wash the dishes.
S

I am new to this page, but figured I would throw in my recent facepalm experience from a few weeks back doing ambulance radio swap outs. Setup was VHF and UHF radios mounted in the center console. Swapped out for all band radios with remote heads for the front and back. Almost all the trucks had hot glued connections between the cat 5 cable pinned out from the back of the UHF XPR4550 and the remote palm mic in the back of the ambo. One of the trucks had the UHF radio connected to the MDC's WiFi antenna (which was labeled WiFi). Another one, following a similar theme to the cable sacks, had the entire stock power cable tightly bunched together, zip tied to all hell, then crammed into a 4" length of wire loom. Also found the VHF coax was pinched between two aluminum plates, with a self tapping screw part way through it for good measure. And not a single radio had the correct console face plate installed either
J

EM36 said:
Got the trifecta today! Yes this actually ran a 4500 mobile A+ lead to the battery... holy shat batman I can't believe this didn't melt.
Click to expand...

NEVER seen installs like this. We had "an experienced tech" install emergency services gear. He ran 5amp wires and all off same +ve conection. Customer complained about weird burning smell. Wires had almost melted together.

Sadly, 'those techs' are out there. LAZY and make us professional installers look bad :-(

ALL my installs are professional. Slow and steady wins the race.

I saw some pretty sketchy installs from the local Motorola shop at my former employer. Cheap ass bastards would spice together hang up box cables or power cables instead of installing new. We started doing our own installs and never looked back.
S

Here are some more pics from the ambulance installs. 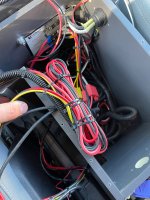 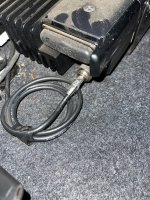 LOVE that connector! I bet it even worked lol

Wait - is that a KENWOOD?? Shudder.

At least on the connector you would be able to see if the ground is corroded. uggg
P

Well they did cut the tails off the wire ties and didn't leave sharp points that rip holes in your hands. 2 of my pet peaves.

Am I the only one that still solders and heat shrinks all of my connections? I completely understand the crimping but I have an old school approach to a radio that I install....
OP

Copperonly said:
Am I the only one that still solders and heat shrinks all of my connections? I completely understand the crimping but I have an old school approach to a radio that I install....
Click to expand...

Probably lol. NOTHING wrong with doing it old school!

Crimp on works well if done well, just like solder on. I knew plenty of guys who could eff those up just fine. Perfectly terrible every time.
You must log in or register to reply here.