Be gentle with me, Astro Spectra's are as rare as rocking horse droppings in UK and my programming experience with them is very limited and several years ago.

I have a UHF 25W 438-470MHz, D04RHF9PW5AN, which when it came to me was working fine and programmed on a wide array of 433MHz amateur channels, some 449MHz stuff, a real mix. I don't know if some tweak was made to work below its intended range, or if that is possible without modification.

I have now sold it and the buyer just wanted four channels, one duplex, three simplex at 458MHz which seemed simple enough. I removed all the unwanted channels, scan lists etc until no invalid fields were recognised and then programmed the radio, however when it restarted I got a solid tone and a message on screen saying ILLEGAL. I have subsequently programmed the original codeplug (after a warning about going out of band) back into the radio and it is working fine.

Given I was programming it in the middle of it's normal range I hadn't expected problems. I have checked the manual and ILLEGAL doesn't show up in the list of error codes. My gut feeling is it relates to the radio having previously been taken out of band, but the CPS obviously thinks the radio is 438-470 as I got the warning when reinstating the old codeplug.

Has anyone got any thoughts on what the problem is and how to get it fixed? 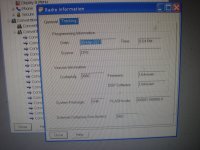 Ive had this happen before, but I cant remember exactly what it was. I thought it was something to do with Astro, but just glancing at the flash tells me its an analog only radio.
Can you post the 4 channel codeplug that causes that message?
X

Hit the channel down button after programming. If it was on a channel number that does not exist anymore, that can occur. Spectras can be goofy.
OP

Oh FFS, all I had to do was change channel. Doh! I guess that'll teach me to check the bleedin' obvious first, rather than expecting the worst when confronted by an out of the ordinary radio. Thanks for the help.

Regarding the question of whether it's Astro or not, it says Astro on the front and allows Astro channels to be selected. In this case it doesn't matter though, the user requirement is conventional only.
OP

Well that seems to have solved things, it still says illegal after programming, but I can get past that now and have the radio operational.

Just one supplementary question, the radio seems to be looking for a grounded mic clip and will go into monitor without. Is there any way to deselect this in the programming or is it necessary to modify the mic internally? Incidentally I tried checking the CPS help for monitor and says "Monitor - A computer component, synonymous with display or screen". Is that unhelpfully helpful, or helpfully unhelpful? Thank you Motorola.

HUB, that's a new one to me, does it stand for something? Hookswitch UB?

That damn checkbox drove me nuts on an APX. It looked like it was scanning but never went to another TG. Turned out to be "HUB Suspends Scan".
OP

Hang up box! I think they just make things up to drive people nuts just for their own entertainment.

That damn checkbox drove me nuts on an APX. It looked like it was scanning but never went to another TG. Turned out to be "HUB Suspends Scan".
Click to expand...

Thats another one knickerless should check. Thats in Scan Configuration. If the defeat PL box is checked that one probably is too.
I always turn those on for my personal radios, but I turn them off for others because it can be confusing if they arent aware of why it does certain things. Worse in multi-user enviroments. I like being able to lock the scan by taking the mic off hook. Simplifies operation to me.
X

I see the use case, but they need to make the scan icon flash or turn off or something. On the APX at least, it looks like is happily scanning away but its not. I drove myself batty for HOURS wondering if I had found another FW bug in 23.02 lol

The term Hang Up Box goes back to the original implementation of CTCSS.
The mic clip was a box with contacts in it to enable tone squelch when mic was hung up.
Some of them had a slide switch on the side so you could monitor the channel with the mic hung up.
This is a picture of one for a MITREC. 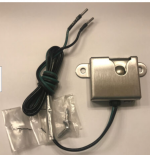 Thanks for the background. I'm still not sure I'd call it a box though, personally I might have gone for wired clip. Then again maybe they just preferred the acronym HUB to WC ?
You must log in or register to reply here.