Status
Not open for further replies.

Any truth to this guys statements? They took an inch off a stubby glued a cap on it and are trying to say it out performs the OEM spec?

Apparently he doesn't realize they already make a T-band UHF antenna, it's the UHF stubby with a BLACK color code. This piece of crap is (I think) a VHF cut off to 2 1/2 inches - the "green" color code is a dab of paint that missed the insulator or was photoshopped in, it looks like originally was a BLACK VHF antenna (150-162 MHz). By modifying a VHF antenna, the coils are spaced closer and he can shorten it to 2 1/2 instead of the 3 1/2 inches the BLACK stubby already is. For the loss of an inch, it's performance is making a compromise solution (a stubby sucks to begin with) that much worse.

Interestingly I have an 700/800 MHz antenna that looks almost exactly like it but even shorter. I think it's made by MaxRad but it's interesting it's only 1 inch long and it actually works fairly well! It has a tiny bit less gain than the eye-burner 800/900 MHz stubby, and they make it in 2 ranges, blue dot for 700/800 and red dot for 800/900 MHz. It's quite cute, it looks like a UHF stubby shortened to about 1 inch, and the radio looks like it has 3 knobs on it when it's installed on an XTS2500 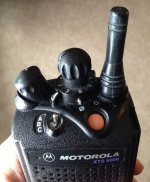 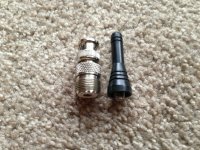 Sent from my iPhone using Tapatalk

I have a friend with one of those on his XTS2500 800mhz. He lives out in the boonies and claims it works great..

Mars, No. I had one of the ones you show and it sucked pretty hard as I recall.

No, here it is (the band indicator dot is on top, not the insulator)...

As I said, this works amazingly well, almost as well as the normal stubby 800 antenna.

Plus, the radio looks like a signal bargraph in silhouette profile 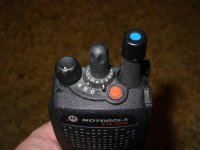 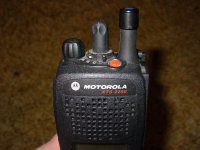 @Firecpt809 - it IS remotely possible his antenna has more gain than the normal T-Band stubby but if so ONLY in a VERY narrow range of frequencies. By close-spacing the coils and shortening it, it trades off bandwith for little more gain. So the gain figure may be higher for the 5 Mhz he claims it for, but over the 30-40 MHz that the normal antenna covers it will have less gain everywhere else. A definite case of "specmanship" at best.

The guy selling them is trying to cater to the Chicago police/ fire they use XTS3000's on the polide side and XTS5000's fire. He is out of a suburb of the city. Those are the freq ranges that they use. One gripe that the cops have is that the batteries run down fast, thats becase of cheap low bid batteries and poor battery maintainace, and the antenna on the PSM is too tall. They dont need the gain as the system has recieve sites allover the city at almost every school. I think its all voodoo bs..
G

I saw an episode of Cops awhile ago, I think they were riding with some Sheriffs Dept in Florida- Most of them had these things on their mics.

@Alpha, I've seen those on 48hours, Miami PD, always wondered who made them, been looking for a supplier since I saw them.
OP

A place out of South Fla has them Mutual Aid Supplies. I believe there was a sys admin for a county down there banned them from use because of poor performance. The cops liked them because of the size. Just so you know the guy selling them is a real tool...

Firecpt809 said:
A place out of South Fla has them Mutual Aid Supplies. I believe there was a sys admin for a county down there banned them from use because of poor performance. The cops liked them because of the size. Just so you know the guy selling them is a real tool...

I'll save you all some time, he's selling the crappy one Mars had pictured. I am still trying to find a source for the one I showed. I'm not 100% positive they are made by MaxRad, that was the best I remembered - I got them used from someone who I haven't spoke to in a couple of years, so I'm trying to remember exactly who made them and/or where to get them...

So thats where that antenna came from! The one that MARS posted, I got a junk box of odd antennas and there was like 10 of those buggers in them and they totally suck on 800 with my MTS2000.
Last edited: Jan 31, 2013

Status
Not open for further replies.