I wonder if someone can help me getting service manual/documentation on a repeater I found, it seems to be two GM 350 radios with some sort of a controller built into the housing. The controller has a RJ45 on the front of it with five lights a program button and a setup button. I'm not sure if this is something somebody put together or it's sold like this from Motorola.

Sounds like a Motorola RICK for the controller. Think that setup was the GR300/500 setup in the day. I have a couple GMRS repeaters of that flavor in a storage unit.

Given they are European GM350's, I'm guessing what you have is an ENLN4055A Eurobase housing which was sold by Motorola in Europe to build repeaters out of GM350/950 series and subsequently GM340 (CDM750) mobiles, They came as either blanked off boxes to wall mount or with an exposed front rack mount adaptor. They were designed to use either HLN3333 R.I.C.K. (Repeater Interface Control Kit) dating back to GM300 era where the base was to be standalone or ENLN4056 T.R.I.C.K. (Tone & Repeater Interface Control Kit) if you were wanting line control using the shitty overcomplicated Centro Plus controllers Motorola badge engineered. In practice, for standalone repeaters, many dealers didn't bother with an interface and linked the radios directly, particularly as the R.I.C.K.'s went out of production midway through the Eurobase's production period.

You can see pictures here (ignore GR900 it is a red herring) https://www.oppermann-telekom.de/enln4055.html

If I'm correct, I've got several manuals pertaining to assembly/service/setup and even the T.R.I.C.K. programming software. The GM350's just program with the standard software as a TX and RX radio. If the thing works as a repeater as it stands, my advice is don't piss about with the interface. Even if it is looking for a line connection, they were normally set as line fail talkthrough to operate standalone if the line was not connected. Just program the two radios to frequencies you want and use it as a standalone repeater. Those setups are pretty bombproof apart from the continuously running fan which used to die after a few years, these were usually ignored as uneccessary in less than tropical UK
Last edited: Nov 9, 2021

Here you go, some manuals. I have also included a zip with the T.R.I.C.K. software, I hope given these went EOL in the 1990's I haven't transgressed the rules. As I remember it's pretty rudimentary and I've no idea what sort of machine you can run it on, Windows 95 perhaps. I think it may have used the GM350 lead but couldn't be certain. I can't offer programming advice, I only used it a couple of times and I've slept since then.

Hopefully, if I have divined the correct model of repeater, one of the mods could update the thread title to make the info more readily obvious to anyone seeking Eurobase info?

This looks exactly like what I have. I'm guessing this is programmed through the RJ45 on front of the RICK. I'm wondering do I have to program the entire system through the RJ45 on the front of the RICK? I dug up a copy of the RSS for the RICK online using the model number you provided. My next challenge will be to either try a virtual machine for running RSS or maybe use a pcmcia serial. Otherwise if that does not work I will have to source a old centrino computer with a real DB9. Has anybody tried programming any type of RSS using VM and 95, 98 or XP? Have any luck?

Sorry you've not grasped it at all. You have two standalone radios and an interface, programming wise they are all separate.

Each radio is programmed through it's mic socket as you would any other GM350. They may be programmed as a RX only and a TX only, or frequently they were both programmed with RX and TX, so the two could be swapped in the field if a PA failed for example. I have attached the software, it was designed pre-WindowsXP but I have it running okay on my XP PC.

I'll repeat my advice that if the repeater is working, why piss about with the interface? If you are determined to play with it, I'd recommend starting with the TRICK software I provided here, rather than hunting the internet for RICK software given that the two devices are completely unrelated other than similarity of name. You have a TRICK not a RICK, here are some pics to ID, or you could check the part number on your interface. The real giveaway is the RICK has no RJ45 on the front as a quick Google search would have shown you.

If as I suspect it is a TRICK you will see I posted the Installation & Programming manual which has this helpful suggestion for where to start PC wise. "The RSS runs on an IBM compatible PC running the Microsoft Windows 3.11, Windows NT or Windows ‘95 operating systems." I'd suspect you may be able to get away with Windows 98 too, but I can't be certain. Personally I wouldn't even bother trying to force a newish PC to make the software work. Then again I wouldn't be pissing about with the interface anyway, if it's working it would stay in place if not it would be ripped out and the radios connected direct, or more likely I'd sell the two radios and PSU and weigh the housing in for scrap

The GR900 was the simple build-yourself black box repeater in Europe from early 90's which was subsequently replaced by the Eurobase described above.

Unlike the Eurobase the GR900 actually said GR900 on the front, another differentiation is the GR900 had vents in the lid which the Eurobase doesn't. It consisted of two GM900 10W or 25W mobiles (not sure US equivalent, but similar to a MCS2000 M1 with two digit display, but 16ch PL and no trunking). The mobiles may or may not have heads, you could buy headless radios with a blank cover to make up repeaters. The loom from the two mobiles either connected into a line interface, I can't remember it's number, but different to Eurobase and as I recall rather flaky. For simple repeaters the interface was often left out to save money. As with the Eurobase they were simple, fairly bombproof repeaters ideal for industrial sites, but maybe not ideal for tower sites and other high RF environments.

I don't have any info in electronic form, but I do have a few GR900's gathering dust

Edit: Here's the inside of one which has no interface just the looms connected back to back, but you can see the mount holes for the interface in front of the PSU. That PSU is part GPN6134_ which was obviously a derivative of the GPN6133_ sold in Europe for standalone bases/fixed mobiles. 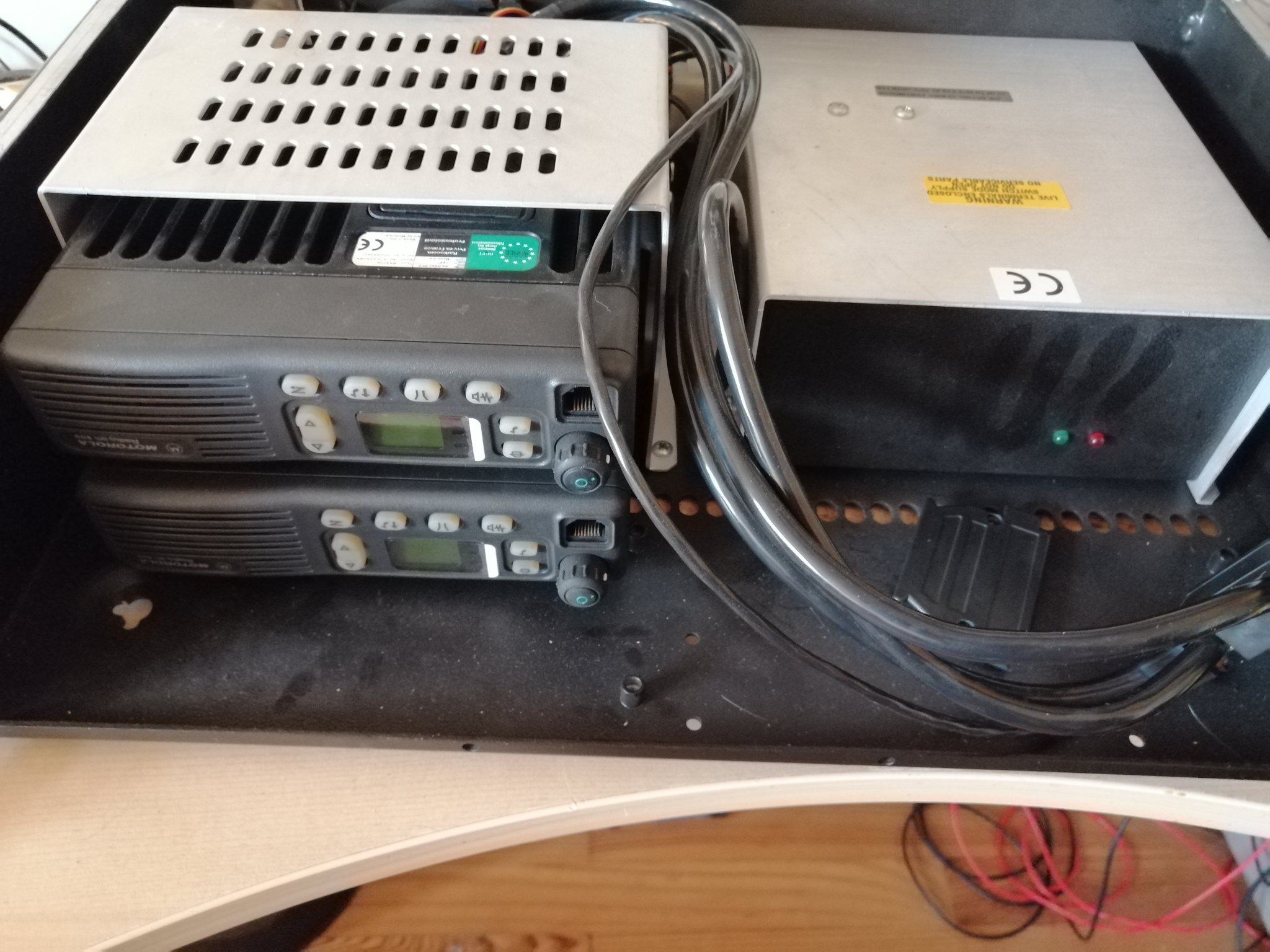 From the pictures of GR500 I've Googled, it seems conceptually similar to the GR900 and Eurobase although the enclosures and internal metalwork are different on all three. Your GR500 is larger, at 7.5" high whereas the Eurobase is 6.5" and I'm guessing the GR900 is probably 6". I have no idea why Motorola didn't standardise on one housing worldwide, but I'm sure it made sense to someone / is typical of Motorola lacking common-sense (delete as appropriate to your opinion of Motorola)

For all you saddo's out there I've dug up a Eurobase brochure which even includes the horrid Centro Plus line controllers that were bought in from a Scandinavian company IIRC. The pictures show it with GM350 128ch or GM950 128ch (950's were essentially GM350's with 5 tone signalling included). The housing continued to be marketed after the Waris series came out. I've also included a GR300/500 brochure too so you can play spot the difference.

You must log in or register to reply here.