Anyone else think that Motorola has gone to the dark side, when compared to years past? 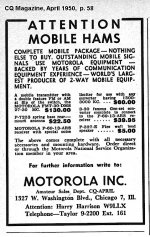 Get your own APX7500 VHF/UHF mobile radio with Federal FPP and NO 12.5 KHz restriction!!!!

Get the full-featured DTMF/command mic for an extra $379.99!

At those prices how can you afford not to buy an APX?

How much does it cost to have the flash option to have the FCC enforcement unit bug my telephone and harass me at work enabled? Or to have the extra ****ty customer support when I need to send it in for servicing because I'm a private citizen?

If anyone at Motorola is reading this, they might want to be taking some notes on how not to flush away potential sales in a fiscally austere environment.....

But you forgot the 2 most important factors affecting yearly inflation in Post War Economics. Executive Bonuses/Bailouts and the cost of Kool Aide!

You also forgot to include the cost of CPS and cables to the APX pricing.

Didn't moto also try two times to sell a variant of radios to hams and failed because they didn't market it in the right places? I think one of these was an ham version of the GP68?

Yes, the GP68 was marketed towards Hams in the US, but their completely inexplicable PL scheme made it impossible for most Hams to figure out how to FPP the radios caused most people to give up on them. That and their lack of features like MDC also made them unattractive to people who wanted the full Motorola feature set.

They also marketed the Micom low-band 2-30 MHz series radios toward Hams too. They had the Israel plant make up a special order so they resurrected the production line to make the last lot of 10 units, which were purchased in a group buy for some Ham friends of mine. I think they paid about $2000.00 each for them, IIRC.
K

REALLY? You have actual evidence of the Ham Micom actually existing?? The one with the tuning knob??

We've all seen the manual for it, but I've never seen a photo of the thing itself.

Yes, I know personally 3 of the people that were part of that group order. One of my good friends has 2 of them, one has a 12-channel selector the other has an LCD screen on it. I don't know much about them myself. I was given a chance to get in on the order, but I didn't have 2 grand sitting around at the time... I visit him once a year for vacation, I'll try to get some pictures next time I'm there...

I think any company that has been around as long as Motorola would also have had major policy changes over the years. The world ain't the same place it was back in 1950. Considering radio was still relatively new back then, the ham market was probably huge as far as percentage of potential buyers goes. Today...barely a blip on the radar.

Hams buy up over 70% of all used commercial equipment, No business in thier right mind would deliberatly ignore such a slice of the aftermarket support/accessory sales but then again who said mot wsas in their right mind???
J

In the 70's Motorola had a regional sales office in Dallas. Hams could by traded in Motorola equipment from them until they found out that some of that equipment was finding its way back into public safety and commerical markets. I am not saying that I agree with Motorola's policies, but I can understand some of them.

Notarola said:
Hams buy up over 70% of all used commercial equipment, No business in thier right mind would deliberatly ignore such a slice of the aftermarket support/accessory sales but then again who said mot wsas in their right mind???
Click to expand...

If /\/\ had a flat rate service for hams, Ie 'send us your radio, and for $150, we'll tune it, remove trunking, and add digital conventional and FPP', they'd make a mint.

I can understand wanting to offset R&D and licensing costs, but they price themselves out of the market.


Realistically, an APX should run about a grand, but because of gov't grants and subsidies, the 'you need this' sales people, and idiots agreeing with them, you get 7k$ radios.

/\/\ could make a ton of money selling ALT/'refurbished' radios, but instead, choose to destroy them, so they don't get back into their customers' hands... :bang:

It would take 2 seconds to make a custom FW that restricted FPP to amateur freqs, and there would be no CPS needed. Much like they intended the GP68 to be.
OP
S

This tells me Motorola is doing just fine ignoring hams. 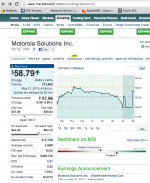 Courtesy of American taxpayers.......Adding to our deficit.

Notarola said:
Hams buy up over 70% of all used commercial equipment, No business in thier right mind would deliberatly ignore such a slice of the aftermarket support/accessory sales but then again who said mot wsas in their right mind???
Click to expand...

The problem with repair support is mainly one of parts availability. I think Motorola's model of (typically) manufacturing a model for 10 years & supporting it for 5 years after EOL is quite adequate for a manufacturer. After that it falls to the service shops & how good they are at keeping things running...which helps keep them in business. As far as accessory sales, they tend to be available long after the actual radio support ends, depending on availability. I can still purchase an HT600 NMN6156 RSM from Motorola, for instance. Not bad for a radio that was built in the 80's. Conversely, try getting factory service, or even sourcing OEM accessories, on say a 5 year old laptop. Much more of a challenge, depending on make & model.

I don't know - state subsidised industries do become very in-efficient, bloated and over time product a products that not even the govt wants, then they crack up at how they are no longer loved and want more hand outs.

Maybe Motorola will go the same way Ford has gone in the Australian car industry.