A while ago I saw a thread in this forum where a user had upgraded the CRT to LCD on a R2600B that inspired me to do the same however the user never replied to questions or PM’s regarding how he performed the upgrade by myself or others. One specific question for me was what CGA to VGA converter did he use to perform the upgrade on his unit.

It must be said the R26XXA, R26XXB and R26XXC series service monitors use an internal monochrome CRT display with external DB-9 CGA port where the newer version R26XXD and R2670B have been upgraded to LCD from the factory with an external D15 VGA graphics display port

In pursuit to upgrade my service monitor to a LCD display I scoped the DB-9 connector H-Sync pin to find the scan rate was 15.7Khz indicating CGA video standard was being used however the catch is the RGB signals are digital and not analogue that the chosen GBS8200 was expecting. A scaler board was built to convert the RBG and HV input lines to the R2600 to analogue however this proved to just be a frustrating journey. The GBS8200 was first tested with a LCD monitor and then with a AUO G065VN01 V2 6.5" 640x480 LCD, both resulted in unstable sync waving image at the top and bottom of the display. Over time I tried another scan converter that resulted in disappointment once again where the last few pixels where missing from the vertical lines resulting in missing vital information from RF and Audio zones.

The project was paused for a while where I toyed with the idea of using the controller from a NEC MultiSync monitor that was supposed to sync CGA however that also proved fruitless.

Not that long ago it was bought to my attention by user 35echo in another thread that the AV-1M scan converter was compatible and worked with the R2600X CRT series so I promptly placed an order and built a shielded DB9 to DB15 cable (see the last image for cable pinout) and once the AV-1M arrived the solution was tested on the bench see Image#1 with positive results with only issue found was the bottom horizontal line of the soft menu (last scanline of the display) is missing where I was unable to get it to display correctly by experimenting with the vertical positioning, phase or clock of the AV-1M converter or LCD display settings. For the price of the AV-1M I can live with the results.

First step of the conversion on my R2600 series service monitor was to dismantle the unit and remove the CRT see Image#2 & Image#3. I do not need to tell you guys great care must be taken when handling CRT tubes and sensitive electronics such as the processor card as mishandling the CRT can result in electric shock and ESD damage can occur to components blah blah blah. The CRT and display board was removed with the HT lead attached to the display board from the tube as one as I did not want to discharge the CRT inside the R2600 chassis.

Once the CRT was removed I test fit the AUO G065VN01 V2 6.5" on the front panel see Image#4 placing the LCD on the black CRT gasket where I verified the best positioning of the LCD. The CRT bracket was used on the inner side of the LCD above the GEN port and on the outer side I removed the two facia screws and used two D-Sub connector nut/bolt with spacer to then fasten the facia back down and provide mounting support for the outer side of the LCD (the original two facia screws reused to mount the outer LCD bracket to the new mounting posts). Measurements where then taken and I drew up some brackets in Eagle PCB that where milled out on PCB cladding via CNC see Image#5. Mounting hex spacers for the LCD VGA driver board provided a neat solution for the additional board see Image#6.

The LCD display has metal surrounding the LCD facia that was visible from the front so I crudely placed black electrical tape over the metal to provide a better look. The AV-1M was mounted on the side of the RF cage with double sided tape and wired with DB15-DB15 SVGA cable to the LCD controller see Image#7, a D15 SVGA cable was cut and then used to connect the input of the AV-1M to the CGA DB-9 connector of the processor board by neatly soldering the cable signal wires to the solder side of the CGA DB-9 connector maintaining shielding with minimum unsheathe of the signal wires, appropriate isolation and insulation was put in place to ensure no shorts to any of the processor card components or pins using Kapton tape under the joint and the cable was secured to the top of the processor card with a cable tie, memory battery replaced and reassembly of the service monitor commenced routing the new cables neatly and away from the fan. No pictured taken from this step as I was nearing the end of the conversion and forgot to take them. 5V and 12v power source for the AV-1M and LCD VGA driver board taken from the RF motherboard J2 connector and wires routed neatly and as short as possible to the two components.

The DB-9 connector of the processor card was chosen as the display input source over the CRT connector from the processor card as the service manual indicates only a monochrome signal is provided to the CRT where the full colour pallet can be found on the CGA DB-9 port.

With the conversion completed see Image#8 the service monitor was tested and ensure expected behavior and that I had not forgotten to reconnect anything inside, the pictures taken during the disassembly process where used to assist with the correct location of RF cables to the RF cage cards from the front panel and data slice. Tested the service monitor in GEN mode as well transmitting RF into the RF I/O port to ensure no RF was effecting the LCD operation.

Parts used listed below and sourced off eBay


*** If you chose to follow any of this information provided above please do so at your own risk and take the necessary precautions to protect yourself from harm and prevent damage to any equipment. *** 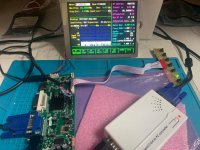 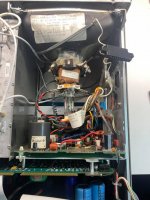 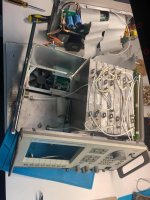 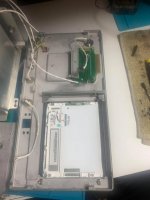 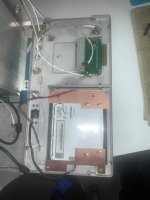 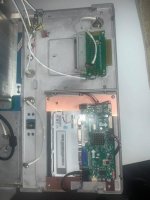 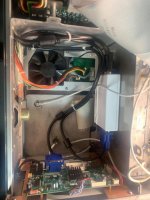 Are all of the components in the configuration able to save their programmed values? The reason I'm asking is that I'm experimenting with some other scan converters (and will post my successes/failures in other threads) and have seen some that I can get dialed-in fairly well but they can't save their setings, so removing power results in losing the working state.
OP

Yes the scan converter and LCD controller save configured settings during power cycles.

The menu buttons where removed from the LCD controller for installation to the R2670A with the option to connect if necessary,

Configuration of the LCD controller and scaler was done during testing in image#1 prior to install and have remained since.

Wow. That's the coolest thing I have seen in awhile.
One of the things I worry about is the "death" of the display in my 2600.
This would be the fix!

I have seen some for HP8920s on eBay. Perhaps finding this other vendor might be useful.