I'm providing this writeup as a reference for anyone who is searching for a fix for a similar CRT display issue. Please be extremely cautious when working with CRT monitors and their display boards as extremely high voltages are present. Research how to discharge a CRT, ensure you have a discharge tool (which you can make yourself using things you already have lying around the shop) and ensure there is no voltage present in the components before you proceed.

I've only had my R2600B for a couple of weeks but the display started flaking out on me. As you can see, there would be nothing but a vertical line at power on and this would happen intermittently. Lightly tapping on the top would restore the regular display - until that no longer worked and I was forced to dig into it. Although I am considering doing the color monitor upgrade at some point in the future, the parts will take several weeks to arrive and I still want the CRT to work since I'll likely sell it to recoup the cost of the upgrade. 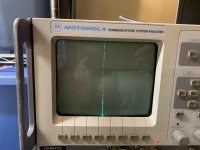 Figuring something must be loose with a cold solder joint, I started gently poking at the components on the display board, using a plastic probe and keeping one hand in my pocket. It didn't take long before I located the capacitor shown below, that when the slightest amount of pressure was placed on it caused the display to light up. 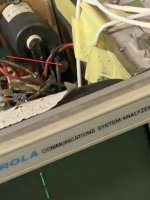 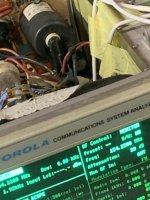 Now that the suspect component was located it was time to pull the display board and see what was going on. I unplugged the monitor and left it turned on all night. When I came back to it in the morning, I was unable to locate any voltage via a detection probe but disconnected the display board interface from the service monitor and performed a CRT discharge procedure. It appears that there are bleeder resistors on this CRT, as there was no pop or anything to indicate voltage was present - but don't take my word for it as I don't have a schematic to reference. I was able to use pliers to release the plastic retaining clips at the top and long forceps to squeeze the clips at the bottom. The bottom-right clip I had to release very carefully from behind - the others I was able to release on the component side of the board. The board came out without having to disconnect any of the wiring and I was able to lay it flat for inspection and repair. 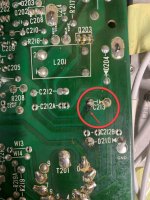 The suspect component was located, a large Capacitor labeled C213. I could see the left leg moving when gently wiggling the cap, and there is obvious light charring on the board where the cap was clearly arcing as a result of the cold solder joint. 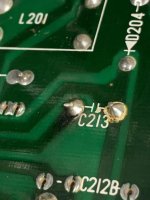 A close-up of C213 prior to reflowing.

Reflowing the two capacitor leads and doing a quick visual inspection also led me to reflow T210 as a precautionary measure (see 1st photo of display board), as this is a large pin with a lot of pressure on it and I was concerned that given the proximity to the cap, whatever force caused the capacitor to dislodge could also have impacted this component as well. Reassembly was quick and painless, ensuring that all of the clips snapped into place and verifying that none of the wiring to the CRT had been disconnected during the repair. 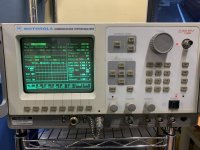 Everything went back together without a hitch, and power-up showed success! I haven't had an issue with it since, and tapping on the unit no longer makes the display jump.

As I said previously, be very cautious of attempting this repair given the high voltages present. Hopefully this helps someone out at some point...
Last edited: Oct 24, 2020

I've experienced this problem with a couple of R2670 units. EXCELLENT information. I've passed this along to someone currently having this problem. THANK YOU!

I had exactly same problem in my ICOM IC-R9000 receiver. There must be a lot of current in the horizontal deflection ckt to cause the capacitor leads to heat up and flow the solder. Probably along with 15KHz current flowing to stir things up.

adamr368 said:
Please be extremely cautious when working with CRT monitors and their display boards as extremely high voltages are present. Research how to discharge a CRT, ensure you have a discharge tool (which you can make yourself using things you already have lying around the shop).
Click to expand...

We use the installation personnel for this purpose. Its often highly amusing watching them dance around.

Seriously this in important. With so many service monitors and such using LCD screens its easy to pop the case on a CRT based piece of hardware and act as a ground to discharge the flyback.
OP
A

Hopefully it helps; I'm making an educated guess here, but there's likely an identical cap for the vertical side that, when horizontal lines are present (vs. vertical), might not be making contact. If anyone encounters this scenario and can confirm before the thread times out, please comment.