I look after a bunch of SLR5700 repeaters and they seem to be collectively loosing fans after 5 years or so in service. The 1RU SLR5700 uses three identical 38mm San Ace 38 series DC tube axial fans made by Sanyo Denki to cool the power supply module, the modem (receiter) and the PA FRUs. If you’re not familiar with the SLR 5700 then you can follow along at home by watching this first:


Fan replacement can’t be done with the repeater mounted in a rack and is almost impossible to do without powering off. Break out a T10 Torx driver and remove all the external screws plus the internal screws that hold the plastic front panel. While the fans simply clip in place, there are 15 screws that need to be removed to get at them! I’m seriously considering milling away the plastic front panel to allow future fan replacement without the faff of disassembling the repeater.

Next problem is sourcing the fans. Moto has a kit PMLN7244 SLR 5000 Series Fan Assembly Service Kit that’s about $75 or so. YMMV. The issue I had was not so much the price but availability in these COVID times. The same fan from Digikey (but without the four pin Molex plug, bracket, and bushings) was like $13, part number is 9GA0312P3K001. These were out of stock so I had to settle for 9GA0312P3J001. The ideal part is 9GA0312P3K0031 which has the Molex plug attached, not certain if that’s a Sanyo Denki special for Moto or a stock unit, either way they’re available on AliExpress for $26.

So, settling for the available part number with slightly less blow (20.1 vs 21.2 CFM) I snipped off the Molex plugs from the dead fans and soldered then to the new fans covering the joins with heat shrink. New fans on the left and old fans on the right prior to swapping the Molex plugs and brackets. Three fans are required per repeater. 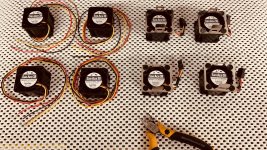 Here's one after surgery with an original fan retention bracket attached: 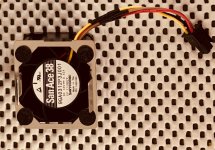 Unfortunately, the fan flanges are not identical to the originals. Not certain if this was related to the part number or a production change, the image below shows the issue and it made mounting the fans using the rubber bushings a bit of a pain. The upper unit is the new fan and the rubber bushings need to pulled down the mounting tubes. The lower fan is the original type with the bushings pulled thru a flange rather than a tube. 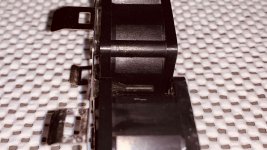 Posting this not as a money saving tip but as an availability work around.
Last edited: Feb 21, 2021

What a hinky design. I hope when those fail there is protection to keep from melting the PS/Modem/PA??

I appreciate the write up. When you say the fans are failing in service - are they just getting noisy? I haven't seen any failing, yet.
OP

They're noisy at full speed when new, rated at 59 dBA each. When I say fail, I mean they don't turn. And I have a unit with a dead PA here on the bench. Don't know if the fan failure killed it but the PA fan is dead.

As for protection, there is a fan alarm raised which you can see via RDAC if that works on your network and you look. The fan alarm also shows up on the front panel alarm indicator but you have to be on site to see that.

Bill, agree on Ali but as you know Mouser and Digikey are totally reputable. I only mention Ali in trying to determine if the OEM supplies fans pre-terminated other than to Moto.

Curious as to the nature of the fan failure. We have seen numerous issues with SLR RDAC reporting failures that are in fact an artifact of a bug in the 2.09 firmware, that I believe they finally addressed in R02.09.00.13 but it may have been 08.

I see about a 5-7% SLR fan failure rate in a years time. This is over several hundred SLR. FB

Fatboy said:
I see about a 5-7% SLR fan failure rate in a years time. This is over several hundred SLR. FB
Click to expand...

Thats not good if the radios keep running at full tilt. No "limp mode?"
OP

@phonebuff - yes I've seen that in the logs and was aware of the bug. We're running now the firmware that came around with CPS 15.

The fans conk out one by one and it doesn't seem to be humidity related. We have fans failing in a site that has a plumbed in dehydrator going 24/7 and at another shack that is pretty damp.

@RFI-EMI-GUY - the fans spin up on TX and then coast for a bit before shutting down. They are speed controlled so they don't run full blast except at power on.

I have had a similae experience with the SLR8000, I believe that they use the same fan. One system I maintain has 6 of them and 5 of them have failed. Granted, they were installed in a rather dusty environment but the interesting thing is that the 5 out of 6 that failed all had consecutive serial numbers while the one that did not experience any failures had a totally different serial number. I noticed the alarms via RDAC , getting fan alarms as well as high PA temp so I put them all on low power until I could get them swapped out so the PA's didn't overheat. They were about 3 - 4 years old so out of warranty. Could be that dust/dirt got into the fans around the bearings maybe? Called Moto and they had no real resolution other than to replace the fans.

Astro Spectra said:
@phonebuff - yes I've seen that in the logs and was aware of the bug. We're running now the firmware that came around with CPS 15.

The fans conk out one by one and it doesn't seem to be humidity related. We have fans failing in a site that has a plumbed in dehydrator going 24/7 and at another shack that is pretty damp.

@RFI-EMI-GUY - the fans spin up on TX and then coast for a bit before shutting down. They are speed controlled so they don't run full blast except at power on.
Click to expand...

But when the fans fail do the radios keep going full tilt?

I had some auto rollback on the SLR8000's to around 48 watts so they are good at sensing the high temperature and triggering the auto-rollback on TX. Not sure about the 5700's. I just turned mine down to 25 watts until I could get the fans replaced to be safe
OP

Most of the use of our network is handheld and the repeaters are set for 20W out, yes they generally appear to survive but as I mentioned in post #5 I have one unit with a dead PA and dead fans.
You must log in or register to reply here.