Some years ago back when the San Francisco trunking system was still in its teething stages I came across a few XTS3000s being worn on the belts of SF's finest that had... A three position concentric switch. Or so I've been led to believe. At the time, I wasn't entirely familiar with the XTS series as they were still somewhat new so I thought nothing of it until some time later when a friend (not affiliated with SF) showed me his personal radio and I noted it only had the regular secure/clear switch which led me to wonder just what on earth it was I had seen.

I never did get the chance to track down the detectives I had seen with the radio, and I certainly wasn't going to go sniffing around my neighborhood station should I end up on some watch list. When I eventually worked in SF some years later (on the EMS side) and was issued my own radio it had the regular concentric. By that time I had an excuse to talk to PD on a regular basis and never noticed those strange concentrics again. I know SF experimented with a few different equipment configurations early on but I'm pretty sure none of it was "SP".

My question is: Has anyone ever seen or heard of such a thing? I can't imagine what on earth if would be used for. Its possible the radios were simply the victims of some paint or white out accident and small drops had landed in a few advantageous spots near the concentric switch. But that would be a huge coincidence seeing as it would have had to happen to a number of radios in exactly the same way (unless maybe I was seeing the same accident prone radio - just in different hands as it travelled around the ranks). To this date I'm counting this as the most likely explanation, but who knows, maybe this was a legit option for who knows what.

Here's a (photoshopped) rendering of the alleged concentric switch: 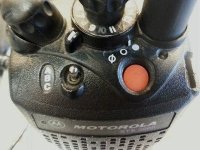 If nothing comes up I'm just going to assume this was another sighting of Elvis' personal Area 51 radio out in the wild.
Last edited: Oct 22, 2013

Can't say I've ever heard of such a beast but it's very possible that it was an SP of some sort. Very interesting!